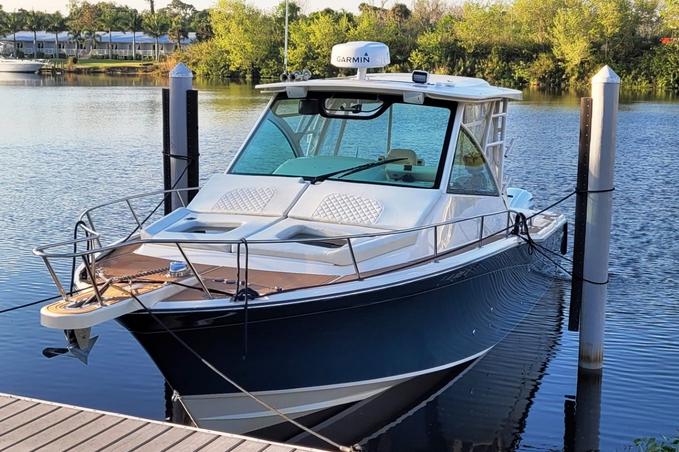 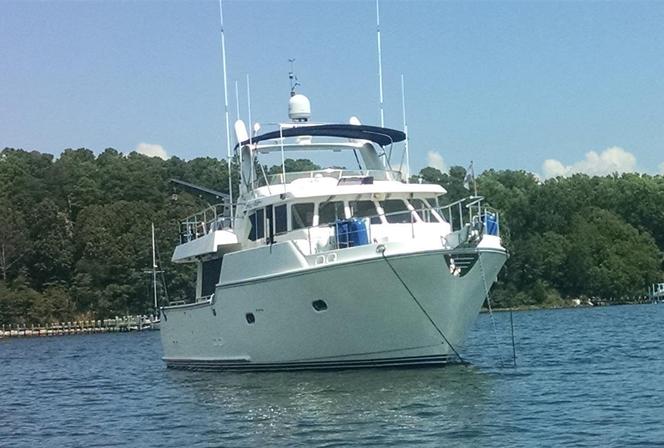 Our Current Ghost Rider is a 2019 Grady-White 330 Express

It's designed for coastal cruising and offshore fishing....an ideal boat for marina hopping & trolling the waters of the Florida & the Keys.

Similar to the previous Nordhavn, this boat can take a pounding if needed, which we'll try to avoid.

The layout of this boat was very similar to our previous N47, but overall interior volume is slightly less; that's because the N50's hull form is sleeker, and as a result is a slightly faster and more fuel efficient vessel. She also has a wet exhaust, a bulbous bow and hydraulic thrusters at both bow and stern.  Estimated range is somewhere in excess of 2,000 nautical miles at normal cruise.  Nordhavn marketing material states 3,000 miles, and that just might be true at a really slow speed without generator use.

The N50 was in production from 1996 until 2005, with only a total of 27 built.  Curiously (or ironically) enough, the N47, which was introduced in 2003, turned out to be the successor to the N50....interest in the N50 waned when the N47 came along, and ultimately was the reason Nordhavn ceased production of the N50 and actually destroyed its molds.  Over the years the N50 has since seen something like a resurgent cult interest -- with its better speed, fuel efficiency and sea-keeping capabilities, there are many who would opt for one...if only they could find a good one for sale.

Previously she had been known as Boundary Waters, then Sea Fox, and lastly The Getaway, and in each case had received TLC and numerous upgrades.  We got lucky; we had seen Getaway when she accompanied the N60 (Relish) that we were taking to Nassau back in late April '17 in preparation for the Atlantic crossing (NAP-2017).  We both commented on her pristine condition and said if that boat ever came on the market again, we wanted a shot at it.  Fast forward just two months, still aboard Relish as we were approaching our last Atlantic crossing port in Malaga, Spain, and Michelle found her in a new listing.  Her relatively new owners wanted a bigger boat.  About a month later we were back in the USA and finalizing the purchase.

Our boat's name, Ghost Rider, comes from a number of different influences, among them the fact that it was one of Rick's favorite call signs.  But more importantly it reflects our belief we have some important spirits (ghosts...four of them) riding with us at all times.  See our "About Us" page for more info on our special ghosts.

Like most Nordhavns, this boat was purpose-built to go long distances in nearly any conditions, albeit slowly.  Its cruise speed averages around 7.5 to 8 knots...with a tail wind and following sea it might get up to 10 knots.  But as with any full displacement trawler, the slower you go then the farther you can go.  Rather than plagiarize what's already been written about the N50, the truly curious can read about it at the following links:

Click HERE for a video of the boat underway to Nassau, Bahamas

Click HERE for a slide show of boat pictures during survey.