While we are fairly new to the trawler life, we've both been boating most of our lives -- originally inland waterways & lakes (mostly waterskiing), and then coastal cruising and offshore fishing after we moved to Florida in 2001.

Michelle grew up in Oklahoma, Rick in Missouri.  And both places were way too cold to stay there for very long.  Rick started out as a USAF military pilot, but both of us spent most of our professional lives in the IT industry.  Fort Myers, FL is our home port.

We bought this boat in July of 2017, our second Nordhavn since we retired in October of 2015.  Since then we've been concentrating on learning everything we can about our Nordhavns and long distance cruising. 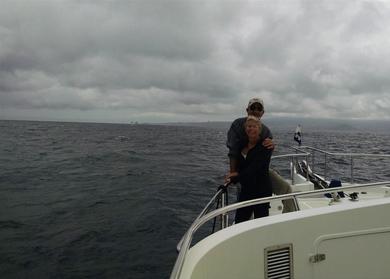 The boat's name comes from a number of different influences, among them the fact that it was one of Rick's favorite call signs.  But more importantly it reflects our belief we have some important spirits (ghosts...right now 4 of them) riding with us at all times.   These four very influential people physically are no longer with us, but  gave us so much, including the adventurous spirit.  Rather than just missing them, we want to remember and repay them.

Danny....Our son,1LT Daniel Riordan, KIA 23-JUN-2007, at age 24.  Call sign "Cowboy Dan".  He was a fine example of an officer and a gentleman, and a leader in the truest sense of the word.  And together we enjoyed rocking out to The Outlaw's rendition of "Ghost Riders In The Sky".  We wear the Gold Star in his honor.

Richard....Michelle's father, Richard Hogan, DOS 19-JUN-2008, at age 75.  Call sign "Lionhearted".  Veteran of the Korean War.  He was fun to be with, his sense of adventure took him across the globe, and infected his daughter with the same fun disease.  Ghost Hollow was one of his favorite places on the planet.

Addie....Rick's mother, Adeline Riordan, DOS 25-FEB-2013, at age 91.  Call sign "Batty Addie".  A veteran's wife for 65 years, seemed absolutely fearless, sometimes dangerously so.  It was not unusual for her husband to come home from a TDY to find she & the 3 kids had packed up and gone on their own TDY.