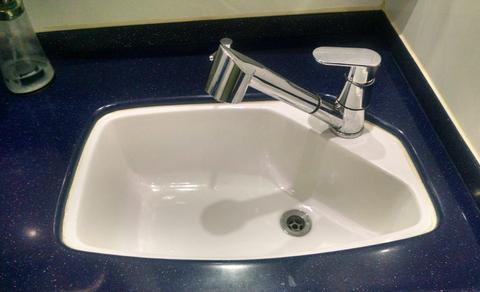 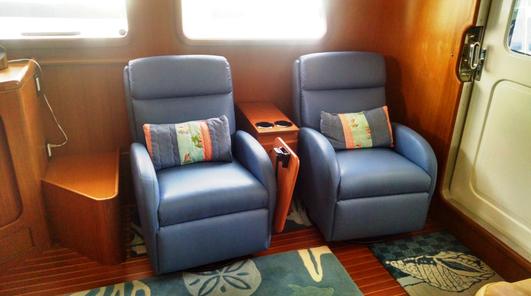 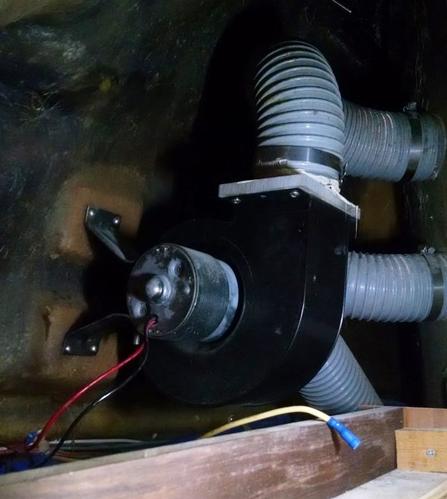 Air conditioning components are either very expensive or hard to reach…or both.  It’s just a rule on most boats.  In the summer of 2018 while cruising and anchoring out in the Chesapeake we had noticed that when the compressor for the pilot house would kick in the genset would droop and surge a bit before recovering to its normal constant RPM.  And sure enough eventually that compressor went totally tango uniform and would not start at all.  Fortunately by that time the weather had cooled considerably so we were able to make it back all the way to Palm Beach in Florida to have the work done.  On the downside we had to replace both the compressor and the air handler since the older units were the now discontinued R-22 refrigerant systems, requiring replacement with R-410 components.

Some time after that the exhaust fan in the master head died.  It took Rick quite a while (and some guidance from fellow N50 owners) just to find where the thing was located…which was in an incredibly hard-to-access ceiling compartment in the forward guest cabin.  If you were the size of a 10 year old with four foot arms it would have still been difficult, but Rick eventually got the old fan (actually a Dayton blower) replaced with a new unit.

The four camera display (with only three active) on the ship's 17" PC monitor & the 10" display that came with the system. 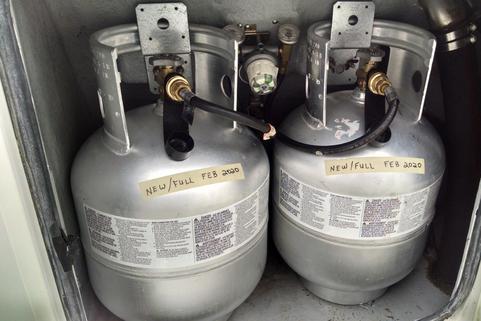 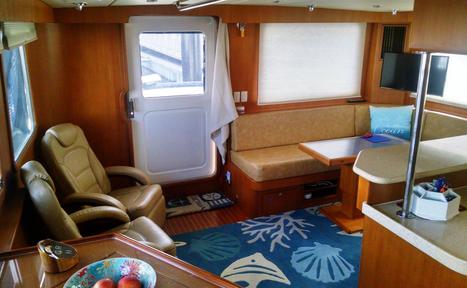 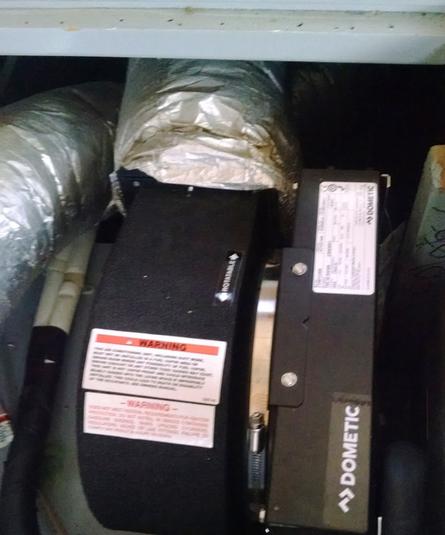 Just before departing for the Bahamas in April of 2018 we noticed that the depth finder on our dinghy had failed.  Rather than delay departure and miss a good weather window we tossed a handheld sonar unit onto the boat and used that for a couple of months.

But when we returned to the USA we sourced a new Garmin combo chartplotter and sonar unit and had our nav technician, Rob Cote from Ocean Currents Marine (LINK), perform all the required surgery. 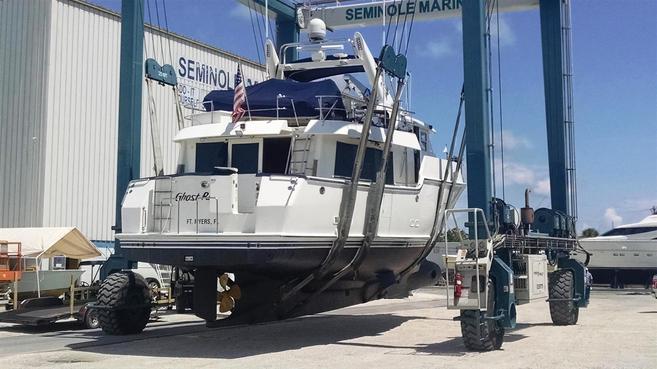 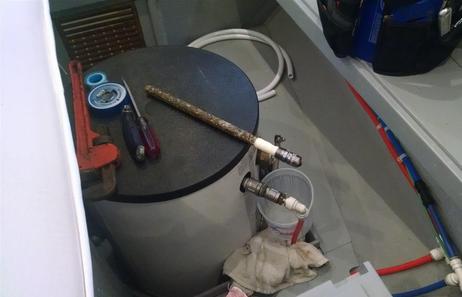 This was one of those "projects" that we pursued in stages, and not necessarily well-organized or timely ones.  When we initially acquired Ghost Rider we first installed a GPS tracking and geo-fencing solution called "Trackimo".  It was a low cost ($150) device with reasonable ($50) annual subscription fees, and it made the insurance company happy.  While the device had its own internal battery, it was simple enough to wire it directly to the boat's 12 volt power panel for a continuous charging source.  We also tucked it out of sight for security purposes....yet it still was able to acquire both GPS and cellular positioning without any difficulty.

About two years later we (finally) decided to attack a remote monitoring and alerting system for a few key health metrics for when we were away from the boat for extended periods -- our main concerns were the state of (house) battery charge along with shore power status and bilge compartment water level.  (We later added cabin temperature as an indicator of air conditioning status in the really, really hot Florida summers.)  The two year wait was mainly due to the fact that we rarely were away from the boat in those initial years, but that changed in year three due to some family obligations and medical issues.  We decided upon and installed a wireless component based system from Monnit, and we are quite pleased with the result. The whys and wherefores of that choice and the installation are documented in a blog post that you can find HERE.

After that we also pursued a CCTV camera system for the boat...and like the Monnit remote monitoring system, it was largely a wireless solution.  We chose a camera package from Cromorc with the main goal of having engine room views from the pilot house, but also a remotely accessible security view of both when away from the boat.  We got lucky with the choice as once again we are happy with the preliminary results.  Details about the system, installation and testing are documented in a blog post that you can find HERE.

Most of the modifications to the fresh water plumbing on Ghost Rider were made early in our ownership.  The system’s accumulator tank wasn’t holding pressure so that got replaced, as did several inline shutoff valves that were either leaking or not fully shutting off water flow when tested.  The latter was discovered when we went to replace the forward shower’s sump pump which had gone belly up.  Michelle also wanted new faucet assemblies in each of the two heads and Rick let Yacht Tech handle those installations.

When our Wheelhouse maintenance program told us it was time to replace the hot water heater’s sacrificial anode we also discovered that tank’s pressure relief valve was defective – that’s potentially dangerous, so we had that replaced as well.  Finally Michelle wanted new toilet seats in each head – they were looking pretty gnarly – so we replaced those, too. 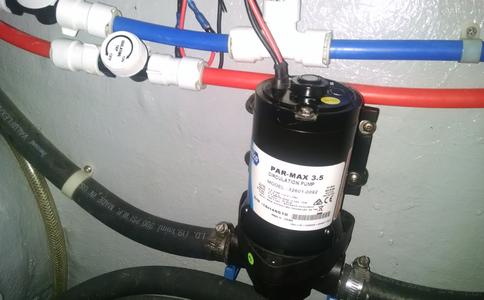 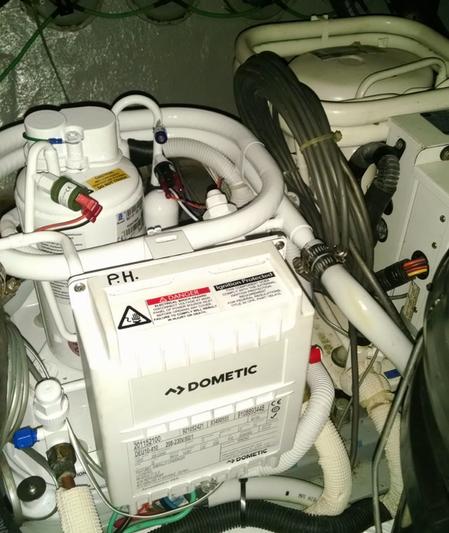 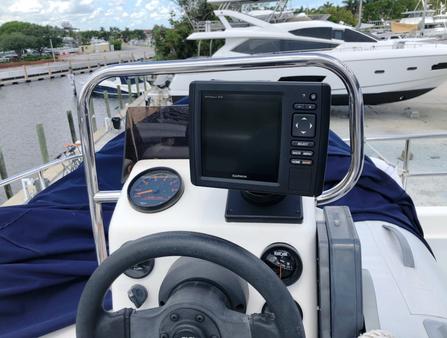 A screen shot of one of the iMonnit portal screens, this one showing the list of alerts and triggers defined for the installed gateway and four sensors. 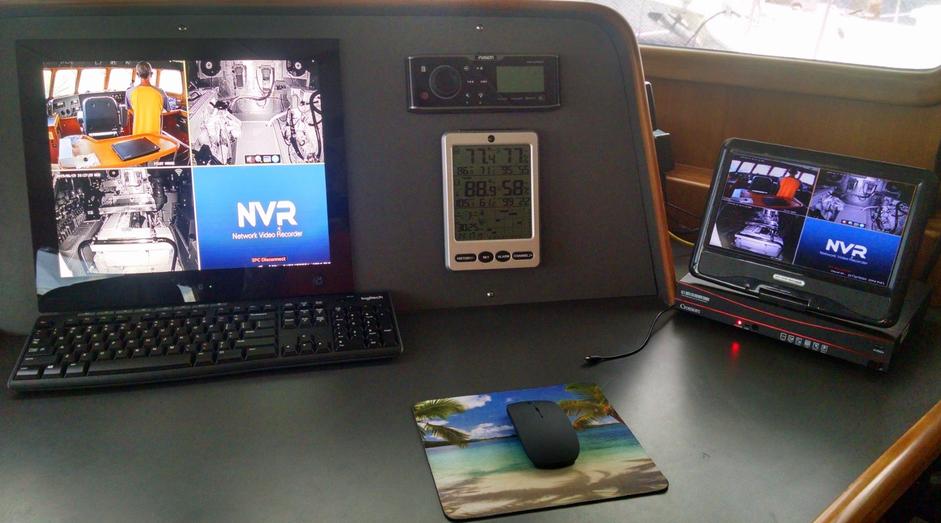 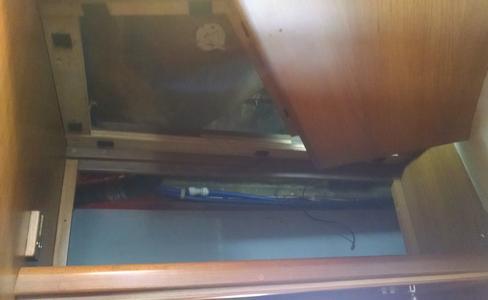 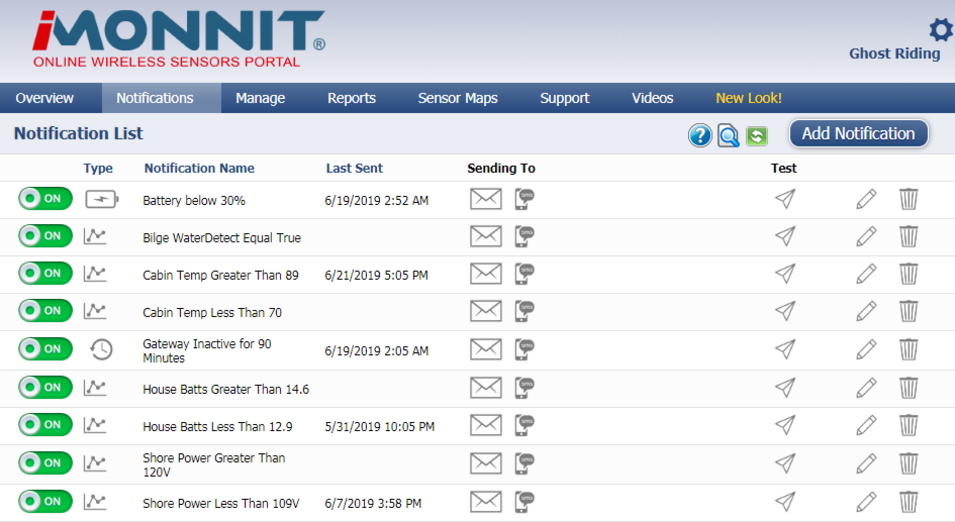 ABOVE LEFT:  A view of the salon with new area rugs but old recliner chairs.

ABOVE RIGHT:  Similar view of the salon with the new recliners in place.

RIGHT:  Frontal view of the new recliners.  A bit more substantial and they recline with only a 2.5" wall clearance required.

Every owner ends up customizing their boat's interior areas to some degree, but overall we were very happy with Ghost Rider's general layout and arrangement.  We did replace some area rugs, the largest being in the salon, while being careful not to cover too much of the boat's teak and holly sole, which we really like and found to be in excellent shape for a 16 year old vessel.

A previous owner had already replaced the television with a flat screen LED and moved it from the original lift cabinet to the opposite corner of the salon - which we find to be much better and viewable location.  The old TV cabinet remains and makes for a very good liquor cabinet.

Lastly we just (April 2019) replaced the two reclining chairs in the salon.  The previous pair were scantily padded and the seams were wearing very thin.  We sourced a pair of Island Loungers from Glastop (LINK) over in Pompano Beach, adding a touch of color to the much increased comfort they provide.

This second projects page summarizes more of the significant projects we’ve undertaken on Ghost Rider II since we acquired her in the late summer of 2017.  Some of these were contracted out and some we tackled ourselves.  Within this context we do not include any of the “scheduled maintenance” activities that go with owning and running such a vessel, but focus mainly on those we found necessary to maintain, correct or improve the quality and integrity of the boat.  Rather than list these chronologically we decided to categorize them as noted below.  Updated May of 2020.​​

The Revised Horizontal Mount for LPG.  The Yellow Arrows Point to the Two New Stainless Steel Studs and
Wingnuts that Were Required.  The Red Arrows Indicate the Previous Studs Used for Vertical Mounting.

During more than two years of ownership of N50-21 we had never been fully pleased with the operational stability the LPG (liquid petroleum gas) system.  While the gas stove, oven and dual-tank LPG storage theoretically provide an efficient and low-power system for cooking in the galley, it was never quite right.  When first powered up it was temperamental as hell, frequently sounding ominous alarms at the galley's control panel, requiring several recycling attempts of circuit breakers and bottle valves.  Then one day we got a call from James Knight over at Yacht Tech (LINK.)

James: "Do you have vertical or horizontal LPG tanks on Ghost Rider?"

After closer examination we discovered that we had two 20 pound LPG cylinders labeled as "horizontal use only" but mounted vertically.  It did not take much research to reveal that was not a good thing.  And the date stamp on those two horizontal LPG cylinders (2001) meant they had been that way since the boat was commissioned back in 2002.  It was a decidedly unsafe arrangement.  But it also gave us a good clue as to why the system would alarm as much as it did -- the pickup tube location in a horizontal tank mounted vertically would almost certainly deliver some liquid (vs. vaporized) gas to downstream components.  We're lucky nothing had gone boom.

Initially Rick removed the two cylinders and fashioned new studs to hold one tank securely in the proper horizontal position.  But the LPG locker wasn't sized for two of them in that orientation, so we had to find a storage location for the second LPG bottle.  A little more research revealed that we really did not have a safe place for that -- ABYC standards dictate the same rather rigorous storage parameters for a spare bottle as it does for an in-use cylinder.

So we went to "plan B", which was to purchase two brand new 20 pound vertical bottles.  These cylinders, by the way, are aluminum (plain steel would rust out within a month), and as such are NOT inexpensive.  But it's back in specs, is a lot safer, also more reliable. 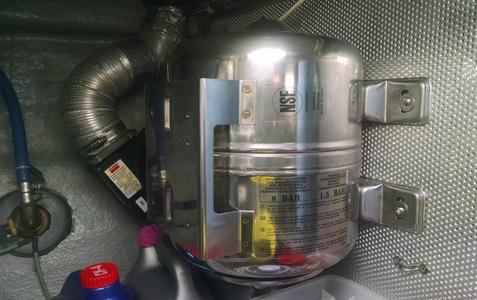 Our New (Vertical) Aluminum LPG Cylinders.  We Had to Get Creative with their Mounting Brackets -- Turns Out that
'Galvanized Deck Post Ties' from Home Depot Are a Perfect Fit After Drilling Holes to Match the Mounting Studs.

The New AC Compressor Located in a Corner of the Laz 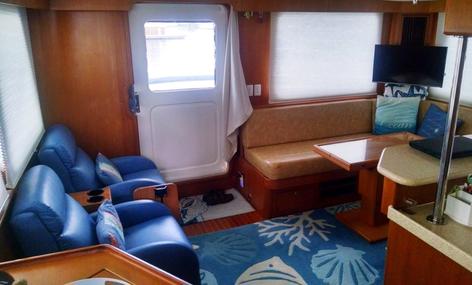 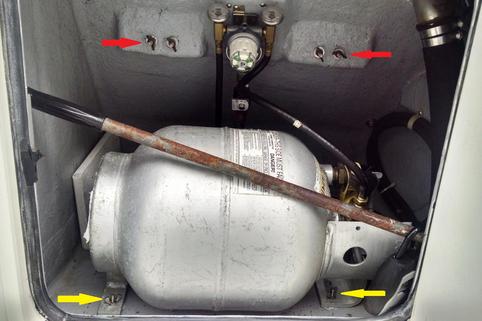 ABOVE:  Somewhere Up Above that Ceiling Panel and Behind that (Immovable) Book Shelf is Where You Will Find the Dead Exhaust Blower.

RIGHT:  Poke Your Head & Shoulders Up Into that Hole and Ah Yes, There It Is!  Total Pain in the Ass to Remove & Replace.